Ecosan: The main objective related to ecosan activities in frame of ELA project was promotion of sustainable sanitation in rural areas. For this purpose AWHHE continued to monitor m aintenance of all toilets (3 school and 28 household toilets) constructed in the framework of ELA and TMF projects.

Household toilets: During the monitoring of the household toilets attention was paid to the proper use and maintenance of facilities. Monitoring showed that out of 28 ecosan toilets 23 toilets were used by the households. Not using of the ecosan toilets was explained that they were constructed only for guests. The trainings on ecosan products usage were organized for the villagers in Hayanist. 10 households (45.47%) used ecosan produce as a fertilizer. Urine diluted with water was used by 6 households on average 2-8 times in total. It was used for potato, pepper, cucumber, egg-plant, bean, vegetable marrow and fruit-trees. No substantial difference in crop yield was noticed. Faeces were used by 4 households. The 2 of the households used it after composting: one simply composted the faeces but has not used it yet, and the other made compost using worms and currently uses it like biohumus. The other two households after keeping faeces for an appropriate period of time used it for garlic and pepper, but as the householders stated no significant changes in crop yield were observed.

As a contribution to ecosan activity, salaries for maintenance of the school eco-toilets in Hayanist and Fantan are provided by the school administrations. Despite many householders had their contribution to construction of toilet at present they do additional works: facing, plastering, tiling etc. 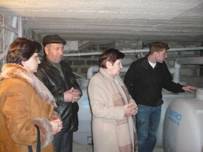 Monitoring of the school ecosan toilet (basement with urine tanks)

Monitoring of the household toilet

AWHHE continuously carries out a visual monitoring of the water sources and quality of water from 6 villages. Mainly w ater from three sources in Dzoraghbyur permanently has had microbial contamination during the last five years. 47 samples of drinking water for microbial investigation were taken and tested in 2009. 16 samples (34%) did not meat national requirements for drinking water quality. Water samples have been analyzed by the Republican Center of Disease Control. 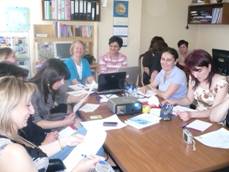 Training on WSP in Armenia

The studies and monitoring conducted in the village Fantan showed that there was a difference in quality between the fertilized winter wheat and the wheat which was not fertilized with biohumus. There was also a difference between different sorts of wheat. The yield of fertilized wheat was 1.5 times higher the control version. 7 ha of winter wheat seed were sown in fields without mineral ferilizers in Khachpar, Solak and Kaghsi villages. In case of growing the sort of tomato “Lia” a special attention was given to the ecological and economic efficiency of replacement of mineral fertilizers with organic fertilizers. There were carried out field observations and laboratory studies for nitrates accumulation specificity, the average weight, acidity, N, P, K, vitamin C, soluble carbohydrates, common carbohydrates in one fruit. The best result was observed in versions that were fertilized with biohumus combined with manure.

Certification of 2 organic orchards continued in the village Hayanist.

Improvement works were done in the school yards of Solak, Kaghsi, Hayanist, Fantan and Khachpar. Benches were made and installed in villages. The orchard in the schoolyard of Hayanist school was replenished with 70 seedlings of “Sateni” apricot sort, 6,5 m long and 1m wide road lying between the benches was paved with tiles and Junipers were transported and replanted along the road.

Plants’ protection activities continued to be conducted in the experimental orchards. Seven orchards in Hayanist, Dzoraghbyur and Solak were treated with herbal tinctures. To coordinate the agricultural activities in Kaghsi and Fantan were established agricultural centers. AWHHE provided these centers with spraying devices, dried plants for making tinctures, information materials and special films for dissemination. Each center has 10 members. 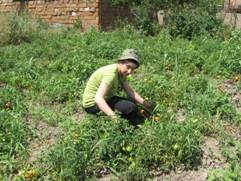 Energy: 3 solar water heaters were installed in Hayanist. The 3 households had their financial contribution which made 21% of the total cost. After the installation was completed, t he solar water heaters were handed over to the villagers. The agreements were signed. The main aim of these agreements is that the beneficiaries understand their responsibilities and become committed to manage and maintain the facilities. 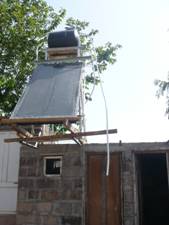 Raising awareness activities: AWHHE conducted many educational and awareness activities. The main purpose of executed activities was to increase awareness about ecological sanitation, safe drinking water for all, sustainable agriculture and waste management and to get them interested in current ecological situation. Information materials including the already existing materials and new brochures and booklets were prepared, printed and disseminated. See sheet of publications. Lectures, trainings and workshops were conducted on health, sanitation, ecological agriculture and biodiversity for schoolchildren, teachers and local authorities. 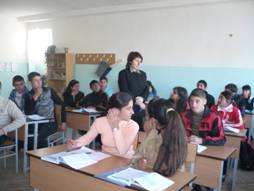 Capacity building of AWHHE: The ELA project led to increased capacity of organisation by sharing and exchanging lessons learned among other WECF organizations, building up knowledge, disseminating lessons learned at national, regional and international conferences. There is a clear increase in technical and management capacity of the organisation. Most notable was the increase in knowledge and skills related to ecological sanitation and water management. AWHHE actively participated in trainings on different topics organized by WECF in Georgia. 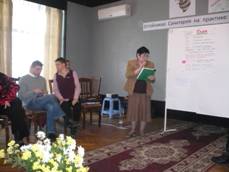 Two main categories of activities are distinguished: the provision of physical facilities like drinking water piping and solar water heaters and awareness and advocacy activities.

The implementation of organic agriculture is attractive and sustainable because it is implemented by farmers and therefore can be continued and expanded after project closure. Organic farming addresses actual environmental problems, and it also leads to increased income of the farmers. At the end of 2009, the certification process for two farmers have been in process.

Ecological Sanitation provides an easy technology to reduce environmental pollution. Its implementation improves the state of groundwater and soil by reducing the anthropogenic pollution. Besides the nutrients are returned to the soil thus generating a nutrient close cycle. Interst by the government (Water State Committee) and NGOs also shows that the ecosanitation will be introduced widely in Armenia.

Improvement of drinking water supply in Hayanist was one of the activities in 2007. The community of Hayanist asked to make an investment in water piping. A stronger sense of ownership and operation and maintenance resposibility were the keys for sustainability of the pilot. Positive experience encouraged AWHHE to continue and laid down pipes in new area of the village.