In 2011, AWHHE became member of the Clinton Global Initiative and participated in the Annual Meeting.

AWHHE Commitment
AWHHE to made a commitment, “Toxic-Free Future: No to Banned and Obsolete Pesticides” which envisages initiating a campaign to develop and implement solutions aimed at eliminating stockpiles of harmful banned and obsolete pesticides at the Nubarashen burial site by the end of 2017. Activities within this commitment, will include a risk assessment of the site, a series of policy dialogues with government leaders, awareness raising activities among affected communities, and training of relevant government offices, community members, and business organizations to ensure proper chemical management and safety protocols generally with an emphasis on agriculture and the transition to organic farming.

About the Clinton Global Initiative (CGI)
Established in 2005 by President Bill Clinton, the Clinton Global Initiative (CGI) convenes global leaders to devise and implement innovative solutions to some of the world’s most pressing challenges. Since 2005, CGI Annual Meetings have brought together nearly 150 current and former heads of state, 18 Nobel Prize laureates, hundreds of leading CEOs, heads of foundations, major philanthropists, directors of the most effective nongovernmental organizations, and prominent members of the media. These CGI members have made nearly 2,000 commitments, which have already improved the lives of 300 million people in more than 180 countries. When fully funded and implemented, these commitments will be valued in excess of $63 billion. 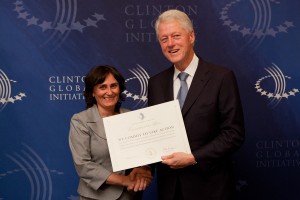