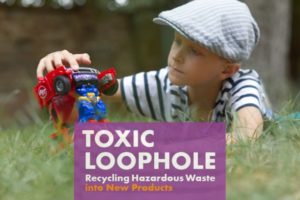 The report release coincides with a crucial vote in the European Parliament to establish and re-evaluate recycling exemptions for POPs (Persistent Organic Pollutants) in waste and with the European Commission’s revision of POPs waste limits. Both decisions will determine whether toxic waste materials, such as e-waste containing brominated flame retardants, will be allowed in recycled plastics.

The study, an analysis of 430 plastic children’s toys, hair accessories, and kitchen utensils purchased in 19 European countries showed that 109 (25%) had elevated levels of bromine, indicating potential presence of a brominated flame retardant. The 109 samples were then analysed further for concentrations of specific brominated flame retardant chemicals which showed 50 (46%) would fail to meet the EU POPs Regulation if the product was composed of new plastic rather than recycled plastic.

“Our research found flame retardants chemicals called PBDEs and HBCDs in overwhelming majority of analysed samples. This is worrying as these two chemicals are among the 28 most hazardous chemicals on the planet. The only way to protect people from hazardous chemicals in recycled e-waste is to close the recycling loophole and keep toxic waste out of recycled plastic,” said lead study author Jitka Strakova, Arnika’s researcher specialised in POPs.

Both chemical groups are currently found in e-waste. PBDEs are a group of chemical flame retardants that exist in the casings and wire insulation of old electronics and appliances and HBCD appeared in polystyrene foams and plastics for electronics and cars.

Stressing that recycling exemptions for PBDEs amounts to a double standard for plastics, the researchers called on the EU to guarantee that recycled plastics meet the same standards as new plastics.

“No one would knowingly give children toxic waste to play with,” said Genon Jensen, co-author of the study and Executive Director of the Health and Environment Alliance (HEAL). “The EU currently allows exemptions so that some of the most hazardous materials in plastics can be recycled. But right now, MEPs have the joint power to close this toxic recycling loophole to protect people’s health.”

Cleaning up recycled plastics could be achieved with strict limits for these chemicals in waste so that all plastics containing PBDEs are classified as POPs waste and treated as such. This means separating and decontaminating plastics from electronic waste.

Stricter controls on POPs waste, also known in policy lingo as “Low POPs Content” waste limits, would stop the recycling of toxic plastics. A number of environmental health advocates urge the EU to adopt a limit of 50 ppm for PBDEs and 100 ppm for HBCD in the European POPs waste law and in the international Basel and Stockholm Conventions. Currently the European Union is promoting a plan [2] to codify 20 times more toxic material into the waste stream with a proposal that would allow 1,000 ppm for PBDEs and HBCD to be recycled from toxic e-waste.

“The devil is in the detail. The specific concentrations set which waste is considered to be a POPs waste and cannot be recycled or exported to other countries for recycling. Ultimately, it is this number that determines whether your child is at risk. Toxic plastics with brominated flame retardants over 50 ppm should be considered POPs waste,” said Arnika – Toxics and Waste Programme Executive Director and IPEN Dioxin, PCBs and Waste Working Group co-chair Jindrich Petrlik. “Only a strict limit for POPs in waste can close the toxic loophole as it would require toxic plastics to be removed from the waste recycling stream.”

Advocates stress that the loophole in the current legislation is not only bad for Europe, it is bad for the developing world as well. Europe now sends 15 – 50% of its e-waste either illegally or as used electronics, with hazardous levels of brominated flame retardants, to less developed countries in Asia and Africa, where it continues to persist and contaminate in the form of recycled plastics.

“Consumers do not know that new products made of recycled plastics can contain hazardous chemicals that were already banned a long time ago,” said Manuel Fernández, the chemical expert of BUND – Friends of the Earth Germany. “The EU should create maximum transparency and traceability of especially hazardous chemicals in products so that the downstream users, recyclers and consumers know what kind of dangerous chemicals might be in the products they intend to use and can opt for safer alternatives.”

The authors of the report are urging Members of European Parliament to vote against any exemptions for recycled plastics during the plenary session that is expected to take place at the earliest 22 October and outlined their concerns in a letter to the EP Environment committee [3].

[3] Response to the EU Recast Regulation on Persistent Organic Pollutants (www.env.health.org)
The letter asks for adoption of progressive limits for PBDEs and HBCD in recycled plastics and the setting of strict, scientifically sound limits for low POPs content levels to effectively protect human health and the environment from POPs and ensure a clean circular economy.

Arnika Association is a Czech non-governmental organisation established in 2001. Its mission is to protect nature and a healthy environment for future generations both at home and abroad. Since its beginnings, Arnika has worked on protection of consumers from chemically hazardous products. Lately, Arnika has been conducting its own research focusing on toxic chemicals in consumer products, mainly toys and childcare products. Arnika serves as the Regional Hub for Central and Eastern Europe for IPEN.

The Health and Environment Alliance (HEAL) is the leading not-for-profit organisation addressing how the environment affects human health in the European Union (EU) and beyond. HEAL works to shape laws and policies that promote planetary and human health and protect those most affected by pollution, and raise awareness on the benefits of environmental action for health. HEAL’s EU Transparency Register Number: 00723343929-96

IPEN is a global network of more than 500 health and environmental public interest organizations in over 100 countries, working to eliminate the world’s most harmful chemicals to create a toxics-free future. IPEN’s EU Transparency Register Number: 157269723532-97