Our presentation on the problem of using dangerous pesticides in agriculture has a form of theatrical performance. It is done within the framework of “Towards Toxic Free Future” project in order to challenge the problem.

The goal of this presentation is to raise public awareness and to encourage public participation in the pesticides use reduction. The performance based on the “Dwarf Nose” fairy tale by German writer Wilhelm Hauff. We decided to pick this fairy tale considering several important factors. 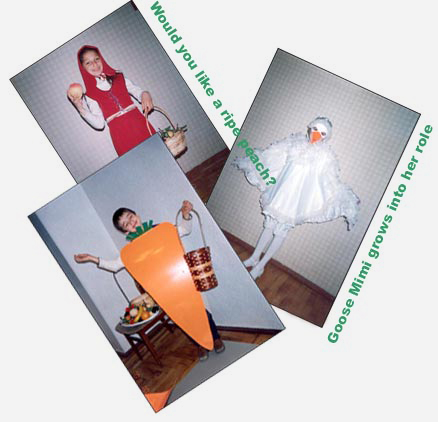 This performance is full of jokes, music and surprises. 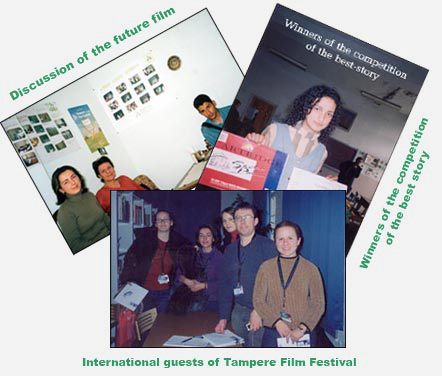 Our interpretation of the basic plot is as follows: A lady, named Hanna, has an exceptionally beautiful little son, whose name is Jacob. Hanna sells vegetables on the market with her son beside her. The customers are dissatisfied with the market vegetables, fruit and herbs. They are not sure if the sold products content any chemicals. One day an old witch Craterweiss comes to the market. She does it every seven years. An old witch belittles Hanna’s herbs and vegetables. Craterweiss claims they content chemicals. Jacob dislikes the old humpback woman with a long crooked nose at first sight. He calls her an old hag. Witch Craterweiss decides to revenge. Upon the request of the witch Jacob carries her basket home. She serves him a soup with a magic herb “Delicious”. The boy falls asleep. He sees a strange dream: some vegetables have come to punish him -Jacob is one of their usual victims; the vegetables complain of people who treat them so fiercely. When the boy wakes up, he has the same long nose he dislikes in the witch, and he has become humpback, as well. In the castle of the witch he learns to cook, as the witch is very fond of delicacies. He finally manages to return home. However, he does not know that seven years have gone by and that the witch has turned him into a dwarf with a very long nose. When he comes to his mother, she throws him out. The boy does not understand until a shoemaker Urban shows him his face and figure in a mirror. In the moment of great despair the Long Nose remembers his cooking lessons and applies as a cook to the duke of that land who loves delicacies as much as the witch. 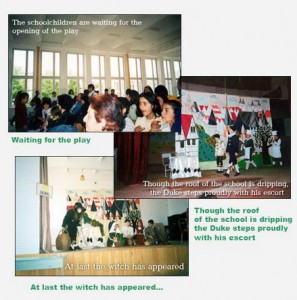 He is being tried and when he succeeds in making a fine dish, is hired. He stays for quite some time. He is head cook but always personally doing his shopping. One day he buys a goose. When he returns to the palace, he discovers the goose is speaking. She is the daughter of a sorcerer who was cursed by a rival of her father. Long Nose keeps her in his room and they become very good friends. One day, another duke comes for a visit. He is as much a gourmet as the duke for which the Long Nose works. The visiting duke challenges Long Nose to prepare a famous pate, called “souzeren”. Jacob has never heard of that pate but he promises to prepare it. His friend Mimmi comes to help, she knows the recipe. Jacob and the goose make the pate “souzeren”, but they do not make it right. One spice is missing. It turns to be the same spice that may turn long nose back into the young man. The spice, named “Delicious” is famous for its magic characteristic. It grows solely on clean soil. When people try to use chemicals for growing, it winds around them and chokes them. With his friend, Mimmi the goose, Long Nose finds the spice. It transforms Long nose to Jacob again. He does not make the pate. He decides to leave and take Mimmi to her father. Mimmi’s father transforms her back into a maiden.
In the end of the play the wise witch Craterweiss brings a basket full of packs of “Delicious” herb. She gives them out to the spectators.

The Long Nose in the USA

The Institutional Art Program of the World Bank organized an exhibition on theatre and development in Eastern Europe , Caucasus and Central Asia : Theatre in Europe and Central Asia : Mirror of society or Agent of Change? that took place in the World Bank, D.C. – USA , from May 26 to July 22, 2005.
The exhibition investigated the cultural importance of theatre in the transition for a more participatory governance, stronger community identity, and a greater voice for the disadvantaged and the poor.
NGO AWHHE was invited to share with the international audience the experience in theatre and community-development.
According to Art Curator of the World Bank Art Program Ms.Galvani, they chose Children Ecological theatre of AWHHE “not only because it is one of the country’s more interesting exempla of community participation and education, but as well for its symbolic role in the current campaigning for a healthier lifestyle for women and children in Armenia which is so cherished program for the World Bank mission”.
NGO AWHHE offered a lecture on “Theatre and Community participation” and a workshop-performance for children “The Long Nose” aimed against toxic pesticides. The performance was created by the Community Mobilization Working Group of the NGO AWHHE to exemplify the work with children and women in rural areas in Armenia . The artifacts connected with the theatrical activities (stage setting, costumes, design) were exhibited at the World Bank main building.

During two weeks, the director of the performance Lusine Babayan taught a talented and enthusiastic group of local performers from the families of the World Bank Group, the IFC and the IMF to perform in the adaptation of the story by W. Hauff “Dwarf Nose”. The troupe was very international, and the actors enjoyed learning about different cultures and making new friends.

Actors of the performance:

On June 23, 2005 , in Eugene Black Auditorium (World Bank, Washington D.C. ) the World Bank Art program and the NGO AWHHE presented the fairy-tale “The Long Nose”. The performance was a great success. It has been the first time the World Bank Art Program organized a workshop-performance for children!
The event has been recorded and will be sent to all the World Bank country offices and various theatre departments. This wonderful event and the experience of NGO AWHHE prove once more how important is the role of performing arts in dissemination of ecological knowledge and for helping and shaping communities.