(Stockholm, Sweden) – Delegates at the first UN negotiating meeting for a global mercury treaty tasted fish under public advisory for mercury contamination. At lunch time, the International POPs Elimination Network (IPEN) distributed more than 200 tasty samples of perch that is so contaminated the Swedish National Food Administration recommends eating it only two – three times per year for women who are trying to conceive a baby, are pregnant, or breastfeeding.

“We want the delegates to confront the mercury treaty negotiations from a fish-eaters point of view,” said Imogen Ingram, Island Sustainability Alliance based in the Cook Islands. “That means acting to protect our children and billions of people who rely on fish for food.”

Globally, fish is a major source of human exposure to mercury and a vital source of food. According to the UN, fish provides at least 40% of protein for two-thirds of the world’s population, including most of the world’s poor. Cooking or removing the skin does not remove mercury. Mercury is highly toxic, especially to the developing brain. The nervous system damage is irreversible.

“Most of the world is not aware of this treaty negotiation, so we are bringing the world situation to the negotiators.” said Professor Jamidu Katima, IPEN Co-Chair based in Tanzania. “The world needs a treaty that makes fish safe to eat by eliminating all human sources of mercury.”

Mercury is transformed into methyl mercury by micro-organisms in the environment. Methyl mercury then accumulates up the food chain as larger fish eat smaller ones. Due to long-range transport high mercury levels are observed in the Arctic, far from the sources of any significant releases. This makes mercury contamination a global issue.

Mercury is released to the environment from many sources including: coal combustion, mining activities, mercury-containing products and devices, product manufacturing sites, metal refining and recycling, cement kilns, waste dumps and incinerators, contaminated sites, crematoria and many others.

IPEN – Is a global network of more then 700 public interest organizations from over 100 countries working for the elimination of toxic substances threatening current and future generations. 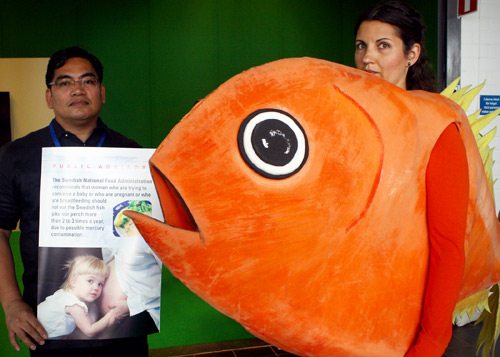