Activities carried out by AWHHE in the frame of the TMF project “Improvement of Sanitation in Rural Areas in Armenia” in 2007
The project is implemented in 3 villages: The village Hayanist of Ararat marz and the villages Dzoraghbyur and Fantan of Kotayk marz.

1. Raising awareness about health and sanitation 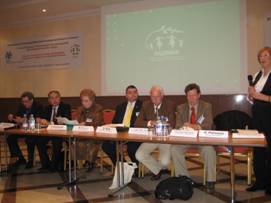 The regional conference “Partnership for Achieving the Millennium Development Goals (MDGs) in Armenia” was organized on October 27, 2007 in Yerevan. About 70 representatives participated in the conference. Among participants were officials from Ministry of Health, Ministry of Agriculture, Ministry of Nature Protection, Ministry of Urban Development, representatives from WHO, UNDP and UNIDO, WWF Armenian offices, as well as experts from Aqua for All, Swedish Institute for Infectious Disease Control, WECF, Water and Sewerage CJSC, Committee of Water Resources, also Georgian NGOs, Armenian NGOs, leaders from targeted villages and marz authorities. The conference aimed at drawing the public attention to the sustainable rural development, in particular to the provision of the rural population with clean, safe drinking water, safe sanitation, and also to the development of alternative farming.

The representatives of “Amur koriz” were invited to bring organic products from their markets and sell them during the “Regional Conference on Water and Sanitation”. Thus, the conference participants got an opportunity to buy organic or non pesticide products and the idea was very good for the promotion of organic market and products.

5 new leaflets on water, agriculture and hygiene (“Don’t Pollute Our Water”, “Let’s Save Water”, “The Role and Importance of Green Fertilizers”, “The Clean Teeth are the Pledge of Health”  and “Hand Care”) and 1 Brochure “Alternatives to Pesticides” were created.

AWHHE’s community mobilization unit worked intensely in the schools of the three project villages. Lectures on health, sanitation, waste management and organic farming and 3 eco-games on biodiversity and water were conducted for 607 schoolchildren. Eco-competitions on composting were organized in the targeted schools. The main purpose of these activities at this step was to introduce to schoolchildren the general idea of waste management and recycling, composting and sanitation and to get them interested in current ecological situation. The schoolchildren and teachers were very enthusiastic.
Composting activities with school children in school gardens of Hayanist, Dzoraghbyur and Fantan and in orchard of Saghmosavan were conducted. During this activities children gained practical skills and knowledge about composting and its future use. The school principles were very grateful to the donors and manager of the project.
The ecological study room was established in Fantan school. AWHHE provided information materials created by AWHHE and other organizations.

AWHHE created a 17 – minute movie “The cost of Poverty” on air pollution in Armenia. Movie was presented at CSD-15 meeting in New-York and at the Ministerial conference in Vienna.
The radio and TV programs were presented on air pollution, pesticides usage, obsolete pesticides burial, water and waste. All programs highlighted ecological issues in Armenia. The articles were published in the national and local newspapers and magazines.
In frame of information campaign AWHHE created a cartoon on waste. The cartoon was shown by HAY TV, Erevan TV, Armen Akop TV and Shoghakat.

Website: The updated website is more functional, clear and complete in terms of structure, it looks pleasing to the eye as well. English and Armenian versions are available and can be easily accessed from either version.
The number of people that visit the website can be monitored based on the online data counter which is located in the bottom right part of every page.
We have no any doubt that these activities aimed to raise awareness on environmental issues will be imprinted on mind for a long period of time.

2.  Implementation of the eco-san buildings

The ecotoilet has been operated since September, 2007. The dry urine diverting toilet is equipped with special squatting slabs that divert the urine from the faeces, which are then collected separately. Instead of flushing, the faeces are covered with sawdust that absorbs the moisture and prevents smell as does the removal of the urine. It was possible to construct the toilet directly adjacent to the school building, which would make the use of it easy for the school children. Training on maintenance of ecotoilet for personnel in Fantan was organized. The caretaker looks after the toilet, cleans and maintains it every day. 175 schoolchildren were trained on using the ecosan toilet. 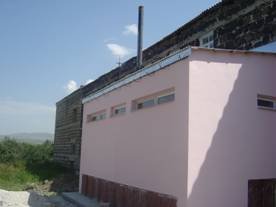 The sand filter was constructed for the grey water of the school toilet. The facilities were opened festively; participants from the regional conference and village authorities were present. Among participants were international experts on water and sanitation. They inspected the toilet building with great interest giving some interesting advice.
In Fantan school  in 2006 AWHHE carried out an investigation of 59 schoolchildren’s stool for the presence of helminthes  Eight children had threadworm and 2 had ascariasis. 10 infected children and 10 contact children were treated. The repeated investigation of 10 schoolchildren’s stool test on the presence of helminthes conducted in January 2007. Investigation was done by the main specialist of the Republican Center of the Disease Control (RCDC). There were no helminthes found. 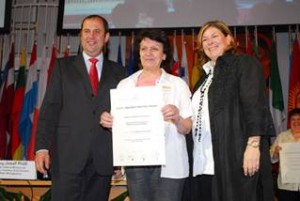 AWHHE participated and presented the project “Ecological Sanitation in Rural Armenia” in the “NGO Best Practice Award” competition organized by WHO and the Austrian government in frame of the Vienna Intergovernmental Mid Term Review Conference, 11-15 June 2007. AWHHE was awarded as a winner at this conference. 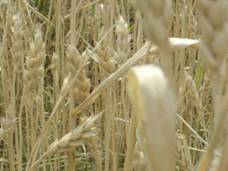 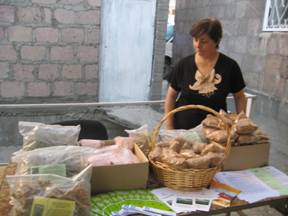 Fantan: The project had acquired water meters for Fantan in cooperation with the drinking water supply company, so that the village could have received household connections via an already existing central water supply system. Ambiguous regulations, unresolved questions of ownership and unclear assignations of responsibilities prevented the actual supply of water, even when all pipes were connected and meters were installed. This issue revealed that many realities of the rural life in the countries of the former Soviet Union had not been elucidated in the official reports, and many problems had resolved very slowly.
Micro-biological analyses of water were done twice in three villages: Hayanist (34 samples), Dzoraghbyur (6 samples) and Fantan (4 samples). Republican Center of Disease Control analyzed the samples and the expert’s conclusion was provided. From the analyzed 44 water samples 6 were contaminated.

Drinking water in Hayanist: The water supply of Hayanist is performed from the pump stations “Araratyan 1, 2”. “Armenian Water & Seweage” CJSC has undertaken certain steps to optimize work of the pump stations ”Araratyan 1,2”, in the result of which in the junction with Hayanist, according to the initial estimation, the pressure will be 7 atmospheric pressure. It is foreseen that, after the completion of the construction of the pump station in Massis, Hayanist will have 10-12-hour water supply.
In parallel with the increase of the water pressure in the junction, thanks to a bigger diameter of the water pipe the water quantity will also increase, that is necessary for the further development of the village, and what is very important, the pressure will be improved in the distributing network of the village, and in all those parts of the village where the water pipe lines are laid on, the villagers will be provided with 8-hour water supply. 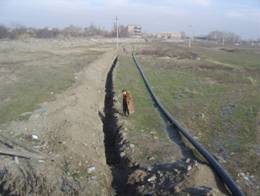 The water sector of Hayanist that passes through the village, is designed to leave in the water supply system of Darbnik as a distributing network. This sector will be connected to the operating distributing network of Darbnik. In this way those subscribers that have illegal connections to the low pressure water pipe of Hayanist, will be provided with better conditions of Darbnik’s network.
At present the water pipe of Hayanist is completely being replaced with new, polyethylene pipes of diameter DN 200 mm. The earth work is already finished, the installation and connection of pipes is in the process.

6. Meetings with the village and women committees in Hayanist and Fantan

Citizens organized their support for the project activities, on the initiative of AWHHE staff, via village- and women’s committees, who took an active part in the awareness raising activities, as well as in implementing, and sustaining the demonstration projects.
The projects focused on involving women in project implementation and local-decision making process. The topics of the organized meetings were ecosanitation, drinking water issues in Hayanist (construction of the pipeline), organic farming and water meter installation difficulties in Fantan. 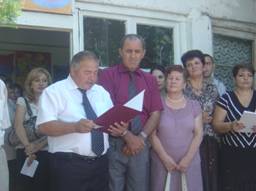 The Council of Hayanist granted diploma of Honored Citizen to Lilik Simoyan: „Appreciating Lilik  Simonyan’s role and efforts in the further socio-economic development of the Hayanist Community and expressing the gratitude of the Community, according to the Article 16, point 24 of Law on “Local Self-Government”.