Supported by Eco-Accord and IPEN

The information campaign, organized by the AWHHE NGO in the framework of the project supported by IPEN, is a part of the global international campaign aimed at establishing support to the actions within the civic society directed to the improvement of the production, usage and regulation of chemical substances for the purpose of minimizing and liquidating the damage currently caused by toxic chemical substances.

In order to raise public awareness on the impact of chemicals on health and the environment in 4 Aarhus centers in Armenia (in 4 provinces) AWHHE conducted 4 workshops with the involvement of representatives from NGOs and local authorities. The aim of the workshops was to strengthen the partnership and cooperation between stakeholders in order to find more efficient solutions to the problems connected with chemical safety at national or local level. To disseminate information AWHHE involved mass media in the workshops.

During the workshops was introduced the SAICM concept as a global strategy to gain a toxic-free future, and also as an instrument that civic societies can use in their efforts to promote the chemical safety. 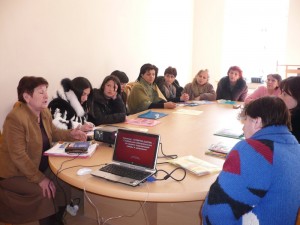 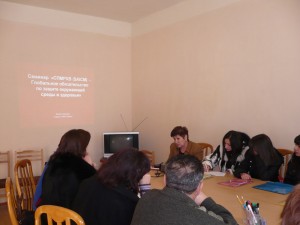 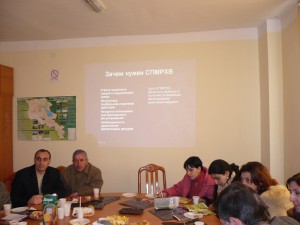 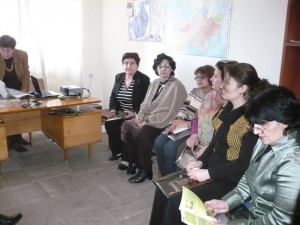 Besides that, there is much concern about such problems like “hot spots”, reproductive health, women’s health, children and chemical safety, as well as chemical substances in foodstuffs. All these issues are of prime importance for Armenia as chemicals are widely used in agriculture and public health. Nowadays, the uncontrolled use of chemicals is going on in agriculture and everyday life. Hence are the problems of pollution with agro- and industrial chemicals, neglected stocks of hazardous wastes, toxic wastes, non – adequate handling of chemicals, contamination of food and other products with dangerous chemical substances. All these issues were touched upon during the workshops. A special attention was paid to vulnerable groups of population, particularly to women and children.

In the opinion of many NGOs in Armenia the pollution with heavy metals is a major problem for the republic. Unfortunately, the NGOs of Armenia do not deal with this problem that is explained by the lack of information on these issues at national level, also by the absence of interest on the part of donors and the national government.

Much alarm in the province is caused by mineral resource industry, for example, shaft mining of polymetals, the waste of which pollute the riverside territories of the river Dzoraget in the region of Armenia that flows farther into the river Debet. And though the NGOs of this province have raised this problem for many times unfortunately they have not achieved any success yet.

The participants of the workshop expressed their concern about the ecological situation in the region of Hrazdan of Kotayk province.

According to monitoring data of the Hydro-meteological Service in the water of the river Marmarik that flows through the region of Hrazdan and flows into the river Hrazdan, are constantly observed different chemical elements, also heavy metals in amounts exceeding the permissible limited concentrations. So far twice were organized public hearings about the opening mining and processing of iron, that is pregnant with additional pollution and worsening the ecological conditions of the water basin.

The existence of the cement factory in this region is another trouble for the region. The laboratory studies testify about sixfold surpassing of concentration of cement dust in atmospheric air.

There exists information based on laboratory studies of water samples for the pollution of water with selenium, vanadium and chromium at the inlet and outlet of the Hrazdan Hydroelectric Power Station. However, official data for public are not available and the mentioned issues are not settled yet. ]

During the workshop the participants expressed their concern about the lack of information about stockpiles of obsolete and unused pesticides and the risks associated with this problem. It was mentioned that there are private trade houses of agricultural toxic chemicals, where the employees are very often incompetent and do not give the instructions and methods of use to the purchasers of chemicals.

Also was raised the issue of dumps. Wastes are constantly incinerated there and the winds take away the polluted air to the south-eastern settlements. Because of the location of the dump the waste waters from the dump together with precipitation flow into reservoir of the river Akhuryan whose waters are used for irrigation purposes of several regions. Here are poured all sewage waters from the city Gyumri, and also the wastewaters from leather processing plant of Turkey .

One of the major problems for Gyumri after the earthquake in 1988 is the existence of districts with campers for temporary residence, where due to distress people burn in their stoves plastics, tires and other hazardous things to heat their rooms. Public representatives have put these issues before the city administration for many times but the problem still remains unsettled.

The workshops showed a low awareness on SAICM process and other conventions on chemicals. Low public awareness on risks related to industrial produce such as toys, construction materials, cosmetics, household chemical goods, electronic industry and its wastes is also worth mentioning. The absence of the monitoring and notification system causes a public anxiety.

AWHHE offered its methodic aid and as a result the Aarhus center of Hrazdan province organized a series of seminars with the involvement of the expert from AWHHE to educate the young teachers from schools of this province on chemical safety, ecology and health. The first w Among the highlighted problems the important problems referred to:

WE express our gratitude to Olga Speranskaya, the head of the Chemical Safety Program for EECCA countries for continuous information support and consultation, as well as to the secretariat of IPEN for assistance to carry out this campaign.