The Republic of Armenia signed the Protocol on Water and Health to the 1992 UNECE Convention on the Protection and Use of Transboundary Watercourses and International Lakes (Water Convention) on 17 June 1999 in London. Since then, the process of ratification has been initiated.
In order to facilitate the target setting process and gain experience in the implementation of the Protocol, the Ministry of Nature Protection with the assistance of the Protocol’s secretariat has drawn up a project proposal.

The project proposal, was submitted to the Project Facilitation Mechanism (PFM), established by the Parties to the Protocol under its article 14 , with the support of which the FinWaterWEI Steering Committee at its meeting in February 2012 made a decision about possible financing of the project.

Overall objective of the UNECE-FinWaterWei project:
To improve the ability of the Government of Armenia to comply with provisions of the Protocol on Water and Health and to develop targets, target dates and measures to assist Armenian authorities in implementing requirements of the Protocol, thus to promote at national level the protection of life and health of the public both in terms of individual and collective aspects, as well as to improve the management and use of water resources, including the protection of ecosystems, to improve safe water supply and discharge, and to control and reduce water-related diseases.

The project is implemented by UNECE jointly with the following main partners:

Major tasks and activities under the target setting process

Agreement on draft targets, programme of measures and indicators

Project duration is 18 months and will be accomplished at the end of June, 2014.
The targets and target dates under the Protocol will be set by the end of the project. It is also expected that Armenia will have finalized all necessary internal processes to become a Party to the Protocol.

Text of the UNECE/WHO Protocol on Water and Health

Brochure on the Protocol on Water and Health     PDF

Brochure on the draft targets and target dates     PDF 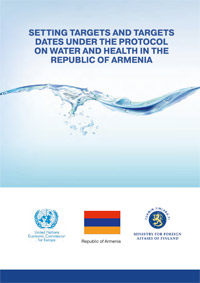