From December 25, 2019 to April 30, 2020 the “Armenian Women for Health and Healthy Environment” (AWHHE) NGO carried out a survey of fluorescent lamps in Armenia, including the city of Yerevan and the following towns of 8 provinces: Masis and Artashat (Ararat province), Armavir and Echmiadzin (Armavir province), Aparan and Ashtarak (Aragatsotn province), Gyumri (Shirak province), Sevan (Gegharkunik province), Abovyan and Hrazdan (Kotayk province), Dilijan (Tavush province) and Yeghegnadzor (Vayots Dzor province). The survey was supported by the “Environmental Monitoring and Information Center” SNCO of the Ministry of Environment of the Republic of Armenia

A total of 1112 lamps were surveyed. The survey showed that light emitting diode (LED) lamps were predominant in the stores of the city of Yerevan, whereas the incandescent lamps (IL) were available in small quantities. As for mercury–containing fluorescent lamps (FL), they were on sale in much smaller quantities. 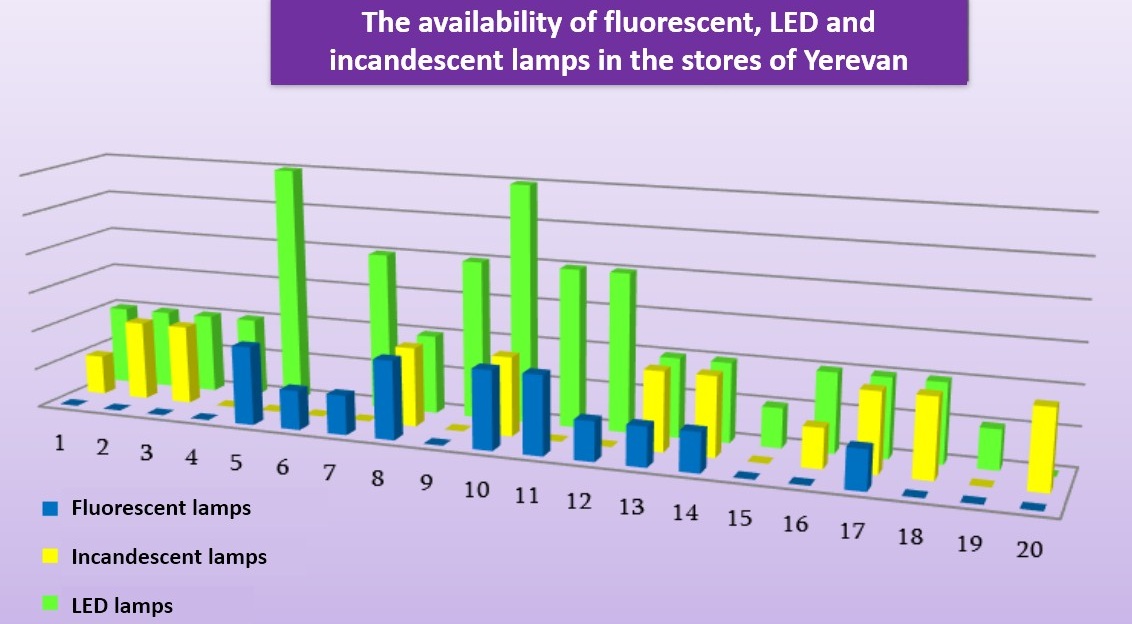 It should be noted that there were shops where the fluorescent lamps were available in small quantities. This is because the import of such lamps was stopped and the sale was carried out at discounted prices.

During the survey of lamp brands, it turned out that different types of lamps from about 137 brands are imported to Armenia: mercury-containing fluorescent lamps, mercury-free light emitting diode lamps, and mercury-free incandescent lamps.

In the stores, you can see different types of lamps under the same brand. It should be noted that only fluorescent lamps are banned to be imported.

For example, three types of lamps: fluorescent, LED and incandescent were available under the brands KOSMOS, Opouqi Lighting, OSRAM, PHILIPS.

Fluorescent and LED lamps were available under the brands CTORCH, EGLO, General Lighting, Supra and Tersen.

Fluorescent and incandescent lamps were available under the brands Borsan, Camelion, Emkay.

There were LED and incandescent lamps under the brands KlAUS, LEUCI, Lisma, LUCIO, NAVIGATOR, START and Zenit.

The fluorescent lamps under the CTORCH, Economic CTORCH, TORCH Energoeconomic, Economic Energy Saving, Energy Saving Lamp and Energy Saving System brands are the lamps of different generations produced by the same company, which have undergone many changes or received new technological solutions in a certain period.

In the past, linear tubular fluorescent lamps, such as the Tinko brand lamps were used to illuminate large halls and classrooms, but now mercury-free LED lamps are available: LED Diffuser Fixture, AD NEXT for classroom, T5 LED Lighting Fixture, T8, IN HOME:

Examining the origin of the lamps, it turned out that almost all three types of lamps were made in China.

Mercury-containing fluorescent lamps for street lighting were available in stores in a small quantity of ellipsoidal lamps with a glass bulb under the following brands: SiRaium (250 Watts – 1400 AMD), Emkay (250 Watts – 1350 AMD), and Alite (250 Watts – 1800 AMD).

The reduction of the price of these fluorescent lamps was conditioned by the fact that they were taken off the Armenian market. Therefore, discounts were applied to the remaining lamps.

The survey of fluorescent lamps showed that the information on the lifespan is indicated on the package by hours or years.

As for the control of the quantity of lamps in the shops or in the warehouses of the importing company, it is necessary to register the number of fluorescent lamps, to find out with current control whether new quantities are going to be purchased or not. Such a function is authorized to be performed by the Market Surveillance Inspection Body of the RA Ministry of Economy.

The survey showed that the energy efficiency class of fluorescent lamps was indicated on the packages of lamps.

The modern energy saving or fluorescent lamps fall into the energy efficiency classes “A” and “B”.

Fluorescent lamps contain mercury vapors, which harm the human health in case the lamp is broken and neutralization measures are not taken in a timely manner.

Another danger is due to the spectrum of ultraviolet rays emitted by fluorescent lamps, which can cause skin inflammation (dermatitis), inflammation of the mucous membrane of the eye (cataract), tumor formation.

The table below shows the mercury content in the lamps. Information was taken from the labels of the lamps.

One of the reasons for the release of mercury vapor is the crack occurring between the tube and the base of the lamp when you hold the glass bulb and exert force to twist the lamp to replace it with a new one.

Another reason is that the residents do not hand over the lamps that have become unfit for use to the relevant bodies for neutralization, but keep them in their basements. Sometimes people accidentally touch them, causing cracks on the bulb, due to which mercury is released in a closed area.

The AWHHE NGO has previously reported accumulations of such lamps in some hospitals and educational institutions. The employees of these institutions, realizing the potential risks of lamps, did not remove them with the municipal garbage. However, as the lamps were kept in humid conditions, and the employees had to move the containers with lamps several times, small cracks appeared on the bulbs, which led to the release of mercury vapor into an enclosed space.

In case a lamp is broken indoors, the concentration level of mercury vapor after some time becomes higher the maximum allowable concentration, which is dangerous for human health. When inhaled, mercury vapors easily pass into the lungs through the respiratory system, and then they penetrate into the brain through blood and cause poisoning.

The immediate symptoms of poisoning include headache, weakness, tiredness, memory loss, and dizziness.

You can get more detailed information about fluorescent lamps from the following sources:

With the help of the relevant bodies operating in the Republic of Armenia, for example, through the chemical safety officers of the Ministry of Emergency Situations, it is necessary to organize the collection of unusable lamps from the residents, transport them in special containers to the neutralization facility of hazardous substances and utilize the luminophore, the damaged glass of the lamp, keep the fragments in hermetically sealed containers (mercury should be kept in lead containers). The components of the lamp should be stored in separate storage units, taking into account the hazard level.

There are devices working under special technology, such as “Ecotrom-2U”, which can utilize mercury-containing fluorescent lamps. The instructions for use of a fluorescent lamp state that such lamps must be used in accordance with the law of the country of sale.