There is an emergency situation caused by the destruction of the burial site of obsolete pesticides, which can pose enormous threat to human health and the environment. The site is located between villages Voghchabert and Geghadir. About 800 meters from the cottage settlement and the village Moushakan and belongs to the Yerevan administrative area. 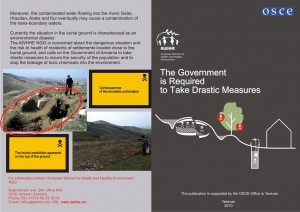 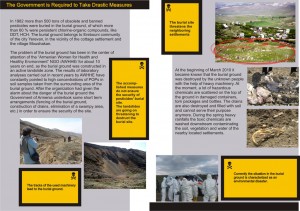 The Problem of the Burial Ground will get a Solution.

The Office of OSCE in Yerevan is lending support

The Nubarashen burial ground of obsolete pesticides is threatening to cause a serious ecological catastrophe. There is an urgent need to remove and dispose the huge amount of pesticides buried in this site. But this is not as easy as it seems to be done. To implement everything safely and on a high level a huge amount of finances is needed. Now the RoA Ministry of Emergency Situations together with the Yerevan Office of OSCE is undertaking serious steps towards the fundraising and the immediate solution of the problem.

A program on study of the area of the Nubarashen burial ground is developed by the Rescue Service of the RoA MES and the Yerevan Office of OSCE. According to this program the chemical situation of the territory must be clarified, also there should be done analyses and recommendations on further steps should be submitted.

On April 12, 2010 a group of specialists from the OSCE visited to the Rescue Service of Armenia to discuss the problem. The discussions were held with participation of representatives from different departments, international and non-governmental organizations, as well the experienced international expert John Vijgen, who was invited by the Yerevan Office of OSCE within the framework of the project “To assist with the disposal of the Nubarashen burial ground”.

There took place a discussion about the situation in the Nubarashen burial ground which was characterized as an emergency situation. To prevent the situation it was suggested that within a possible short period of time activities should be done for the reburial of the excavated pesticides and the restoration of the drainage system. The international expert John Vijgen suggested that the Ministry of Emergency Situations should apply to the Yerevan Office of OSCE and the UN Agency in Armenia with a request to provide funds for the implementation of the activities.

The same day Armen Yeritsyan, the Minister of MES, Edik Barseghyan, the Chief of the Rescue Service of Armenia and Sergey Kapinosa, the Ambassador of the OSCE met with one another. The problem of Nubarashen burial ground was discussed and the immediate solution of the problem was qualified as of utmost importance

The Nubarashen burial ground of obsolete pesticides was constructed still in 1982 but the constructors had considered neither the locality conditions nor the safety rules. They had just dug at a depth of 5 meters and buried the obsolete pesticides with amount of about 600 tons, mainly DDT, in bags and containers just placing them one over the over. As far as the burial ground is in the active landslide locality the burial ground with all its content has been sliding downwards to the near territories for about 30 years on end. In the vicinity of the burial ground are located not only the villages Jrashen, Geghanist and Moushakan, but also the reserve of the natural wheat. The length of the burial ground is 100m, the width is 20 m, and the depth is less than 5 meters. The approximate volume is estimated at 10000m 3 .

In 2004 construction works of a drainage system were done in the area of the burial ground that caused the landslide process to become slower. The area was fenced in and the signs prohibiting the entrance to the territory were placed. But the posts with barbed wire fence were destroyed in some sections by the people, the barbed wires were cut and the prohibition signs disappeared.

On May 15, 2008 a case of excavation of the burial ground was registered about which was reported to the RoA Police Department of Erebouni community. According to the conclusion of the police heavy machinery was used for excavating the burial ground. Three holes were dug; two of them reached the upper layer of the buried pesticides. The pesticides were taken out and scattered about the surface of the ground. Due to the undertaken measures the excavated pesticides were reburied and the damaged section of the fence was restored.

On March 4, 2010 another case of excavation of the burial ground was reported. The upper layer of the burial ground was completely damaged, the pesticides of the upper layer were excavated and scattered about the whole area of the ground, the drains were filled with earth and could not serve their purpose, the post with barbed wire fence were fallen down to the ground, the gate was destroyed. A big environmental harm was caused to the territory, and a real threat of emergency situation occurred. The Ministry of Emergency Situations has appealed to the Chief of the Police of Armenia.

According to the preliminary conclusion of the experts the disposal of the buried pesticides should be executed with 4 stages.

In the 1 st stage the preliminary activities should be implemented including the geological investigation of the area, the chemical analyses of the upper layer of the burial ground (1-2m) in order to find out the availability of possible contamination; sampling of pesticides; opening activities in some sections of the burial ground in order to find out the possibility of assortment; preliminary professional conclusion on disposal methods and possibilities.

In the 2 nd stage it is planned to carry out activities of taking out, packaging and transportation, including the preparation of a working platform in the adjacent area of the burial ground, provision of communication, taking out and transportation of the pesticides to a store for temporary storage, and the re-cultivation of the area.

In the 3 rd stage the identification of the pesticides, packaging and selection of the disposal alternative is planned to be done.

The elimination of the pesticides is planned to be carried out in the 4 th stage.

The buried pesticides of the Nubarashen burial ground are classified as compounds belonging to the I and II categories of a hazard. According to the official documents the amount of the buried pesticides is about 512 tons. But this amount can turn out to be more during the removal of the pesticides. On the 15 th of April, 2010 the working group under the leadership of the Deputy Ambassador of the Yerevan Office of OSCE Karel Hofstra and the Minister of the MES Armen Yeritzyan and the experts of the Ministry of Agriculture visited the Nubarashen burial ground. They investigated the situation, gave their assessments and were convinced of the necessity to organize everything without hesitation.

Thus, the first stage, i.e. the study of the burial ground, the development of a working plan has already commenced. As for the remaining steps, in order to get support to organize the taking out of the pesticides, transportation and the elimination thereof, the Armenian Government will apply to its partners and the international organizations.