During the side-event WECF partners presented very strong and impressive their problems and solutions in their countries and gave policy recommendations. Hripsime Jangiryan from Armenian Women for Health and a Healthy Environment (AWHHE) presented the affecting movie “The cost of poverty” about energy poverty and indoor pollution in Armenia. 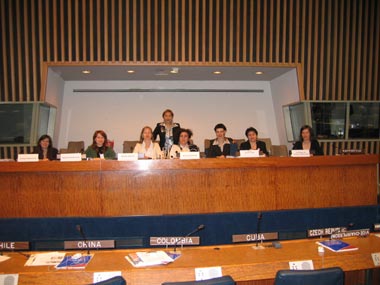 “The Cost of Poverty” Movie Background

Armenia is a country with difficult and unique economical situation including energy sector, due to conflicts in the region, it only has one open border towards Georgia , and has no local oil or gas resources. AWHHE works in 3 poor villages. In one, Hayanist village, the school heats the class rooms with kerosene stoves, which spew black smoke into the class rooms and are dangerous as they easily can explode.

The poorest family in the village is a female-headed single household, a widow with 2 daughters, whose social payments are so low that she can not afford to buy heating and cooking fuels. Instead they burn waste products, such as tar and felt.

AWHHE has produced a TV documentary of 15 minutes, which shows the situation in which the school children and this family have to live, and interviews the children on their perceived health effects. A medical doctor explains the negative health effects from a scientific point of view. The documentary is being shown at a series of conferences around the country and at several international conferences, to raise awareness about the severity of energy poverty in the EECCA region and calls for urgent action