Presentation of the film “A Golden Mine for Sevan” and a Round table (Yerevan, Armenia)

The Interests of Gold-mining Entrepreneurs Expose to Danger Lake Sevan

On December 11 th 2008, at 11:00 a.m. in UN office in Armenia took place the presentation of the film entitled “A
Golden Mine for Sevan” and a Round table on the risks of gold mining for Sevan, where participated representatives from the Ministry of Nature Protection, National Academy of Sciences and the environmental NGOs. 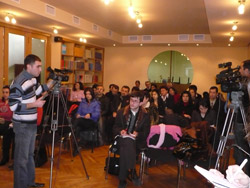 The film was made in frame of campaign SOS Sevan by the informative NGO “Ecolur” and the NGO “Armenian Women for Health and Healthy Environment” (AWHHE) by the support of the international network “Women of Europe for a Common Future” (WECF).

In May 2008 it was cleared up that the GeoProMining Company, the owner of the Ararat gold-mining enterprise and the concession of the exploitation of gold mine of Sotk, has an intention to move the production from Ararat to Sotk. This is not a new idea. In 2005 such an attempt was made by the previous proprietor “Vedanta Resources”, an Indian organization, but the project was refused. 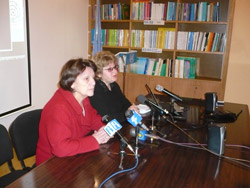 In June the NGOs “Ecolur” and AWHHE gave the alarm SOS Sevan which was spread through www.ecolur.org network. The call was heard and spread through several international networks, such as WECF that comprises more than 100 organizations from 30 countries; IPEN that includes about 400 organizations; as well as through NGO Forum on ADB. Also were received responses and support letters from the Bank Watch Network and UNEP.

The film is about the threat posed by the interests of gold mining entrepreneurs to Sevan that is considered to be the strategic priority of Armenia . The cyanic technologies and chemical compounds that are used for the extraction of gold will make the risks for the lake increase for many times. It is especially dangerous when the wastes of a dumping-tail containing toxic metals and elements remain unchangeable for millions of years.

At present, the Company has restarted the work of the enterprise and of the mine, despite the previous statements of the company about the possible closure of the mine in case the enterprise is not moved to Sotk. Anyhow, the lake is still in danger.

For the purpose of moving the enterprise to Sotk the Company needs to develop a complete project including an assessment of exposure on the environment. This demands long time and appropriate costs. It is worth mentioning that the company has already started the financing of research in Sevan.