Sponsored by: Netherlands, Aqua for All (A4A) on behalf of Women for Water Partnership

Counterpart organisation: Women in Europe for a Common Future (WECF)

The village population consists of 90% former refugees and 10% indigenous Armenians. Most inhabitants of Hayanist moved into this village in 1988.
One of the biggest problems of Hayanist has been the limited access to water sources and the lack of a sewage system. The main sources of water supply in Hayanist have been 17 artesian wells. According to the State Code of Armenia the water of the artesian wells is classified as water for irrigation, and does not meet the criteria for drinking water (GOST 2874-82). Many wells are situated unacceptably close to yards where animals and manure are kept. Thus there is a high risk that the water of the wells becomes contaminated.
The village has a central water pipe and is supplied with water by the Yerevan water supply company. 90 households were connected to the central water supply system. The water quality significantly worsens in old pipes during summer when the consumption of water increases.
A solution to this problem was to connect Hayanist households to the already existing central water supply system. 90 households were already connected within the village. There was a main central pipe (d=150 mm, l= 3,5 km) and internal water supply pipes of 4 km length (d=50mm). Due to absence of finance the work was never completed.

Goal
Provide access to safe drinking water supply for 880 inhabitants of Hayanist village, a poor village in Armenia, where currently people use irrigation water from artesian wells for drinking purposes.

Long period objectives of the project
The project has had contribution to the sustainable implementation of National Millennium Development Goals 7 target 10: Increase access to safe drinking water in rural areas.

Activities:
AWHHE had more than 15 meetings with interested stakeholders (AWSC, local authorities and villagers); created 2 leaflets on drinking water and disseminated 500 copies among the villagers; 3 articles were published on drinking water supply issues. In addition, 2 TV programs “Water and Sanitation System in Hayanist” and “Environmental Health Related to Water” were presented by “Yerevan” and “Kentron” TV channels. 2 seminars were organized in Hayanist about drinking water scarcity and saving.
The new pipeline was constructed in 6 streets and 221 households were connected but the available water quantity and pressure was low, partly because the village Darbnik is situated nearer to Yerevan than Hayanist and withdraws water from the centralized network to fulfil their needs before it reaches Hayanist. AWHHE had an additional small project and a financial support from WECF for improving the existing centralized piped water supply by constructing Darbnik bypass pipeline (1300m).

The water supply of Hayanist is performed from the pump stations “Araratyan 1, 2”. Besides that, the AWSC has undertaken certain steps to optimize work of the pump stations ”Araratyan 1,2”, in the result of which in the junction with Hayanist, according to the initial estimation, the pressure will be 7 atmospheric pressure. It is foreseen that, after the completion of the construction of the pump station in Massis (the project “Improvement of Water-Supply of the city Massis” supported by the World Bank) Hayanist will have 10-12-hour water supply.
In parallel with the increase of the water pressure in the junction, thanks to a bigger diameter of the water pipe the water quantity will also increase, that is necessary for the further development of the village, and what is very important, the pressure will be improved in the distributing network of the village, and in all those parts of the village where the water pipe lines are laid on, the villagers will be provided with 8-hour water supply. 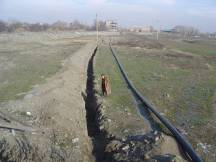 At present the water pipe of Hayanist is completely being replaced with new, polyethylene pipes of diameter DN 200 mm. The earth work, installation and connection of pipes are finished. 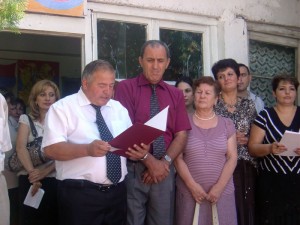 The Council of Hayanist granted a diploma of Honoured Citizen to Lilik Simoyan for her „role and efforts in the further socio-economic development of the Hayanist Community and expressing the gratitude of the Community, according to the Article 16, point 24 of Law on “Local Self-Government”. 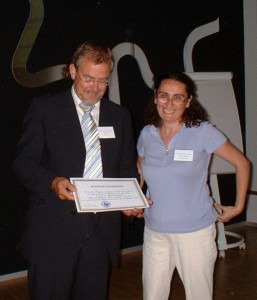