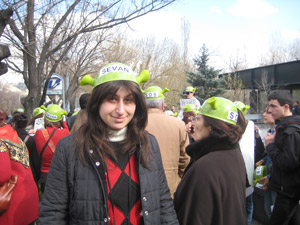 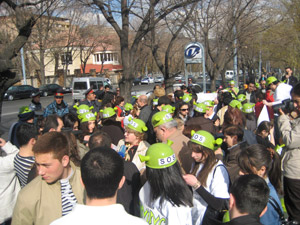 On March 27, 2009 at 4:00 p.m. from the residence of the President of the Republic of Armenia launched an action “SOS Sevan” aimed at saving Lake Sevan.

The action is against the “Geopromining” company that has an intention to build a gold-reprocessing enterprise which poses a threat to the national security of Armenia .

The “SOS Sevan” initiative group (Eco-Alliance) calls the Armenian authorities in the person of the President of Armenia, RA National Assembly, the Government, National Security Council, as well as all political parties, non-governmental organizations, international community, legal authorities to support the public campaign to save Sevan Lake, one of the major stocks of drinking water of Armenia and the whole Caucasus region, to show good will and make the “Geopromining” Company stop its illegal activity. We are appealing to the state authorities to review the contracts with the mentioned company and declare the given licenses invalid.

Sevan Lake is a peculiar ecosystem with volume of 33mlrd.m 3 fresh water. Despite the operative Legislation of Armenia, RA Law on Sevan, UN Ramsar Convention, Aarhus Convention, the “Geopromining” company is going to construct in the basin of Sevan Lake a gold reprocessing plant that comprises a gold-mining plant, cyanides’ and pesticides’ stock, and a dump-tail of the cyanide wastes.

In the document entitled “Conceptual decision on safe construction of the gold-mining plant in the territory of Sotk mine taking into account the ecological risks” the company makes the following conclusion.

•  The construction of a gold mining factory and a safe dump-tail is possible due to such solutions that exclude any danger to the nature.

•  The construction of a gold mining factory and a safe dump-tail excludes the pollution and degradation of the ecosystem of Lake Sevan .

•  The construction of a gold mining factory and a safe dump-tail excludes the pollution of surface and ground waters.

•  The construction of a gold mining factory and a safe dump-tail is possible without doing any harm to the local flora and fauna.

•  The existing international rich experience and conclusions on modeling prove the ecological safety of construction of a gold mining factory and a safe dump-tail under the local geographic and climatic conditions.

This document was discussed during the meeting held on March 2, 2009 in the Ministry of Territorial Administration under the chairmanship of Deputy Prime Minister Armen Gevorgyan, with participation of high-ranking officials from RA Ministries of Nature Protection, Jurisdiction, Economy, Energy and Natural Resources, the administrations of the Center of Eco-noosphere, Institute of Geology, Institute of Hydro-ecology and Ichthyology of RA National Academy of Sciences, as well as the administration of the “Geopromining” company.

The document does not reflect such hazards like 100 tons of toxic waste, hundreds of hectares of dead areas, a cyanide burial site with cyanide compounds, arsenic, antimony, pyrites and etc. These toxic elements will penetrate into the ground waters that pour into the water basin of Lake Sevan .

Besides this, no one can guarantee a security against natural disasters: earthquakes, landslides, as well as other uncontrollable external factors, such as terrors, military actions especially if we take into account the fact that Sotk borders on the territory of Kelbajar .

Alliance of Ecological Organizations of Armenia