6th Global Day of Action against Waste and Incineration

The Global Alliance for Incinerator Alternatives / Global Anti Incinerator Alliance (GAIA) would like to invite all GAIA members and other allied groups to join our 6th Global Day of Action against Waste and Incineration on 28th November 2007.

As the campaign to prevent climate change is gaining ground, there still an immense need to connect this environmental challenge to issues pertaining to waste. Since the climate change debate has also become entwined with the discussion on the energy generation and consumption, it is important that we uncover the truth behind generating energy from waste that is being pushed by incinerator and landfill industries as green and renewable. We see the 2007 GDA as an opportunity to raise our concerns on waste and climate change by organizing build-up activities preceding the UNFCCC (COP 13) on December 3 to 14, 2007 in Bali , Indonesia.

The working theme for the 2007 Global Day of Action against Waste and Incineration will be “Zero Waste, Zero Warming: Dirty Technologies Will Not Clean the World.” By “dirty technologies” – we mean landfills, dumpsites, incinerators of all types, cement kilns burning wastes. Studies show that waste prevention, reduction and recycling can result in big energy savings since the demand for raw materials extraction is reduced.

GDA 2007 will draw attention to the need for safe and sustainable alternatives to end- of- pipe waste management processes that will genuinely reduce generation of greenhouse gases, promote conservation of our diminishing resources and protect human health and the environment from further toxicity.

The “1st International Conference on Adaptive & Integrated Water Management: Coping with complexity and uncertainty” (CAIWA 2007) will be held November 12 – 15, 2007 in Basel, Switzerland. The conference will provide a multidisciplinary platform and bring together scientists from academia, industry, and policy making/government to analyse progress, to explore new research directions and highlight policy implications of scientific findings.

It will focus on basic research findings across all sectors of adaptive and integrated water resource management. Furthermore it will share the major scientific insights from the NeWater project with the wider scientific community and embed it into the current scientific debate in all relevant themes.

The conference will be divided between scientific contributions (3 days) and practitioner insights (1 day). Furthermore it will be possible to organise special workshops under the auspices of CAIWA 2007. For further information and calls for workshops, full papers, and extended abstracts please visit the conference website , find the conference flyer attached, or send email inquiries to caiwa@usf.uos.de .

It would be greatly appreciated, if you could forward this information to your colleagues, friends, students, or any one who may be interested in the conference.

WECF takes part in the UNECE “Environment for Europe” Conference and organises it’s own network meeting.

The conference is in two parts:

The UNECE Enviroment for Europe conference from October 10-12, 2007

WECF network meeting
WECF is preparing its network meeting from October 12-15, 2007 in Belgrade. The meeting will take part right after the Ministerial conference.

In the coming weeks more information will follow on the agenda, meetings places, and accomodation.

The 6th Ministerial Conference “Environment for Europe” will take place from October 10-12, 2007 in Belgrade, Serbia.

WECF and EEB, Eco-Accord are supporting the European ECO-Forum to prepare the NGO input.

The main focus will be made on the evaluation of implementation of decisions made in the framework of the Environment for Europe process since 1991 till now and the preparation of ECOs recommendations and statement for the Ministerial Conference in Belgrade.

I would like to inform you that next year the 9TH INTERNATIONAL HCH AND PESTICIDES FORUM is going to be organized by the Moldova Ministry of Ecology and Natural Resources on 20-22 September 2007, Chisinau.

In this respect we are pleased to invite you to participate in the 9th International HCH and Pesticide Forum.

Details about the 9th International HCH and Pesticide Forum can be found here .

WHO relaunches controversy over children’s exposure to chemicals

In its most comprehensive study yet on the topic, the World Health Organisation (WHO) has stressed the need for more research on children’s exposure to chemicals, arguing that it may be the origin of cancer, heart disease and chronic respiratory disease later in life. The report comes only months after the EU adopted sweeping new legislation on chemicals control, called REACH.

The  European Environment & Health Strategy , adopted in June 2003, aims to reduce the disease burden caused by environmental factors in the EU. The  Action Plan 2004-2010 puts the emphasis on the most vulnerable groups, particularly children, and highlights the need to develop a good information base, including a coordinated approach and more research into human  biomonitoring  (measuring pollutants in human tissues and fluids).

The June 2007  mid-term review  of the Action Plan reiterates the special attention given to vulnerable groups and states that the Commission will gradually step up its effort to exploit the outcomes of several research projects in order to translate their results into policy action. The  annexe to the review highlights progress made by several research projects so far.

The EU law on chemicals  REACH entered into force on 1 July 2007. It changes the way chemicals are approved in Europe , placing the burden on businesses to prove their products are safe before they can be placed on the market.

“Air and water contaminants, pesticides in food, lead in soil, as well many other environmental threats which alter the delicate organism of a growing child may cause or worsen disease and induce developmental problems,” states the World Health Organisation’s (WHO) first-ever  report highlighting children’s vulnerability to exposure to harmful chemicals at different stages of development.

The report is described as the most comprehensive work yet undertaken on the  scientific principles to be considered in assessing health risks in children associated with exposure to chemicals . These principles are expected to help  researchers, policy-makers and the health sector design improved child-protection risk assessments and tailored interventions.

According to the WHO, the stage in a child’s development when exposure occurs may be just as important as the magnitude of the exposure. “Children are especially vulnerable and respond differently to adults when exposed to environmental factors, and this response may differ according to the different periods of development they are going through,” said Dr Terri Damstra from the WHO explaining that, for example, children’s lungs are not even fully developed at the age of eight, and that “lung maturation may be altered by air pollutants that induce acute respiratory effects in childhood and may be the origin of chronic respiratory disease later in life”.

The organisation highlights the fact that over 30% of the global burden of disease in children can be attributed to environmental factors and states that evidence suggests an increased risk of diseases, such as cancer and heart disease, in adults, that is partly due to exposure to certain environmental chemicals during childhood.

The  European Chemical Industry Council (Cefic)  states that it has “continuously contributed to increasing scientific knowledge by investing in research and has improved its products and processes accordingly.”

“The chemical industry calls for a sustainable and integrated approach that addresses real health priorities and seeks efficient solutions that lead to improvements in public health in Europe . Societal requirements for economic, social, environment and health improvement need to be balanced within the ongoing WHO process,” said  Cefic Research & Innovation Executive Director Gernot Klotz.

According to the chairman of the  French cancer research organisation ARTAC , Prof. Dominique Belpomme, the cancer rate among newborn babies has risen by a steady 1% every year in the past 20 years. “It is obvious [that the rise in cancer] is due to chemical pollution”, he said, arguing that foetuses are exposed to “hundreds of chemicals” in the womb (see  EurActiv 18/10/2006 ).

Report from and about activities of Women for Water 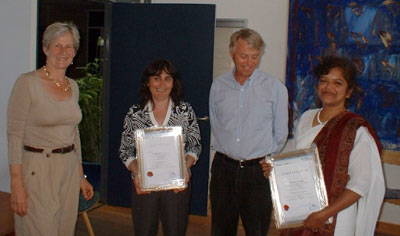 The tour was organized in a way that besides learning we had fantastic surrounding by amazing and brilliant people.

A Diploma was issued by the Governing Board of the Fund at the end of the visit to Denmark.