On September 28-29, 2017, the workshop entitled “Public Participation in Addressing Chemical Safety Issues in Eastern Europe, Caucasus and Central Asia Countries” was organized by the International POPs Elimination Network (IPEN) at the Ibis Hotel in Yerevan. The event was attended by 32 representatives from 10 EECCA countries, as well as representatives from the United Nations Development Program in Armenia, the Office of the United Nations Industrial Development Organization (UNIDO) in Armenia, local non-governmental organizations, Yerevan State Medical University after Mkhitar Heratsi and the Center for Ecological – Noosphere Studies of Armenia’s National Academy of Sciences. During the workshop, active discussions were held on the existing and emerging issues of chemical safety. The speakers addressed issues such as the inventory of the stocks of Persistent Organic Pollutants (POPs), environmental pollution with heavy metals, impact of endocrine disrupting chemicals on human health, pollution of water bodies with plastic materials, gender equality and many other issues. Also, IPEN presented the outcomes of the First Conference of Parties to the Minamata Convention on Mercury held in Geneva in September. 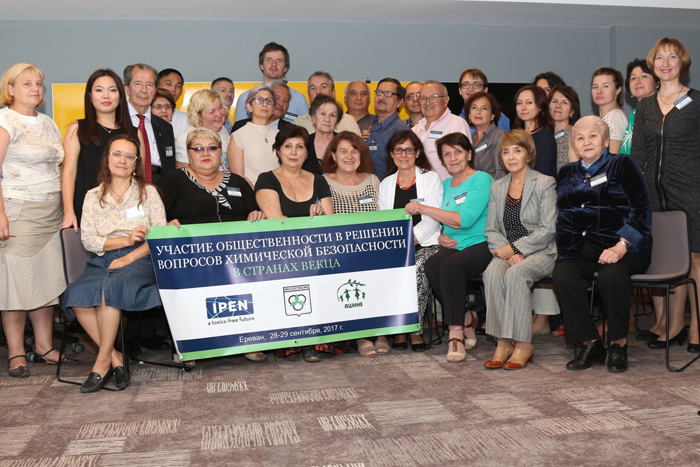 During the meeting the participants were provided with information materials.

At the end of the workshop, the participants made a suggestion to organize such workshops on a continuous basis.